Newslinks for Thursday Mar 15: Signs of weakness in Obama campaign?

Signs of weakness in Obama campaign?

The U.S. Catholic Bishops, united in defense of religious freedom... and against Obama's birth control mandate - George Weigel for NRO

"His defeats, which include losses Tuesday to Rick Santorum in conservative Alabama and Mississippi, have come largely in states that any Republican nominee is almost certain to win this fall. Mr. Romney's winning performances in the swing states of Ohio, Florida, New Hampshire and Virginia suggest that, as GOP nominee, he would present a challenge to President Barack Obama not only in those states but the communities that will be the general election's most important battlegrounds." - WSJ

Romney outspending Santorum by 10-to-1 Commentary ...but it's more like 3-to-1 in spending per delegate won - BuzzFeed

Romney digs at Santorum as "economic lightweight" - The Hill 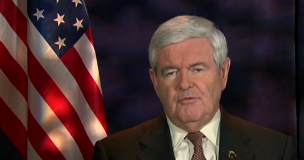 "Pollster Scott Rasmussen told The Daily Caller Wednesday that former House Speaker Newt Gingrich is “not going to win” and “needs to assess his role in the Republican Party.”... but Gingrich's SuperPAC ally tells how his candidate can STILL be nominee - NPR

"Newt Gingrich's failure to win two Deep South states, and the growing calls for him to exit, have also taken Mr. Santorum one step closer to proclaiming this a two-man race between himself and Mr. Romney." - Kim Strassel in the Wall Street Journal

ABC questions the conventional wisdom and says Santorum's best hope might be if Gingrich STAYS in race.

> CLICK HERE TO SUBSCRIBE TO CONSERVATIVEHOME'S DAILY EMAIL AND GET ALL THE MOST IMPORTANT GOP NEWS BY 7:00AM EST EVERY WEEKDAY.

Posted at 07:28 AM in Newslinks, Republican Panel | Permalink

Yesterday we published the first results of ConHomeUSA's latest survey. Those showed that Rick Santorum was up to third place in the race for the GOP nomination.

Today we publish a new tracker poll where, every few weeks, we will track the popularity of key players in conservative politics.

We asked the Republican Panel* to give key organizations and people a thumbs up or thumbs down. The table below summarizes the results.

Posted at 02:37 AM in Republican Panel | Permalink

ConHomeUSA's latest survey of its Republican Panel* finds a big increase in support for Rick Santorum in answer to the question "Who would you most like to win the Republican nomination?". The former Senator has leapfrogged Ron Paul, Rick Perry and Michele Bachmann to establish himself as the third-placed candidate.

Posted at 10:27 AM in Republican Panel | Permalink

Send Ideas/Tips to the Editor

Newslinks for Tuesday April 24: Romney and Rubio campaign together in sign of things to come?

Newslinks for Monday April 23: Romney's healthcare plan may be more revolutionary than Obama's

Newslinks for Friday April 20: Only 24% (RECORD LOW) think USA is on right track

Newslinks for Wednesday April 18: More evidence that Republicans are rallying to Romney