Our goal is to cover the ongoing debate about the future of the Republican party and conservatism in America. And to help spur it along.

> What we do and what we believe. Find out about our unique offerings and how we view the world.

> Our shields. Find out what that colorful banner across the top of the page means.

Donate to ConservativeHome / Subscribe to the Early Elephant daily email

Any donations will be used to buy new computer equipment for ConservativeHome.com and to run the regular opinion surveys.

Please donate via the button immediately below.

Why does ConservativeHome have those shields up there?

ConservativeHome believes that Republicans and conservatives in America should have ideas and policies that address a wide range of issues. This is because the world is too complex for conservatism to be too narrow.

For this reason, ConservativeHome serves as a platform for a wide range of opinions within conservatism. In addition, we have a core set of convictions rooted in what we believe is both a historical and relevant understanding of American conservatism.

These convictions are reflected in our shields. All of the shields are set against a common backdrop of limited government.  None of the values on the shields can be upheld if the federal government is not restrained.  Not all conservatives will agree with what we say below, but we think our shields represent the basic of a conservatism of the future.

Family.  The family is the fundamental building block of a civil society. Conservatives have long argued that family flourishing is at the heart of a healthy society. Contrary to the left, which roots social dysfunction primarily in institutional failure, conservatives have long recognized that we’ll never fix social breakdown if we’re not honest with ourselves about family breakdown. This is as true when dealing with crime and welfare as it is when dealing with household debt and educational achievement.

Families are also where the habits of productivity are instilled. To the extent that policies make it harder for families to save, invest, or launch an enterprise, they’re anti-family policies and need to be fixed. Parents expect their children to have a better life than they had. If our policies are making this less likely, they need to be fixed.

Economic growth.  America has always been the land of horizons. It has long been the place where people come to get a new start, to pursue dreams, to “make it.” Aspiration and economic growth are completely intertwined in the American experience. Conservatives have long argued that we need to remain a nation first and foremost where people can get ahead by working hard and pursuing new ideas.  We’re not the land of opportunity for nothing.

Conservatives understand productivity. They believe the state’s role is to set the rules by which productivity results in growth and an increase in standard of living, not to seize the goods of productivity for its own ends, as the left would have it.

Some have noticed this shield is kind of green. That’s intentional. We believe that sound environmental policy and economic growth can go hand-in-hand, and that conservatives should lead the way on this front. Otherwise, “green policy” debates will be dominated by the left, which uses green policy as a way to achieve statist ends.

What we do and what we believe 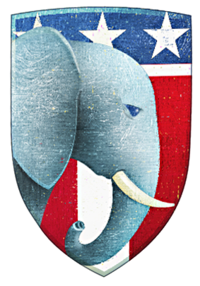 We believe in a broader Republican Party as represented by our eleven shields, explained here.

***
If you have an idea, a link, helpful feedback, or a question, please post a comment on our Home page or send us an email. He is a contributing editor to ConservativeHome USA and from the UK timezone helps prepare the newslinks that are posted here at 6.30am EDT each and every day. He lives in the English cathedral city of Salisbury.

He was an economist at the Bank of England from 1992 until 1998; launched and ran the Conservative Christian Fellowship from 1990 until 2003 (first in his spare time and then full-time); has written speeches for Tory leaders William Hague and Iain Duncan Smith; was co-founder of the Centre for Social Justice; and is a regular contributor to a number of British newspapers, especially the London Times.

Michael Ashcroft was appointed to Britain's House of Lords in 2000. A former Treasurer and Deputy Chairman of the Conservative Party, Lord Ashcroft is an entrepreneur, investor and philanthropist. He founded the Crimestoppers charity in the UK; is Chairman of Trustees of Ashcroft Technology Academy; Chancellor of Anglia Ruskin University; and is a Trustee of the Cleveland Clinic in the USA. The Lord Ashcroft Gallery at London's Imperial War Museum hosts Lord Ashcroft’s collection of Victoria and George Crosses, the largest in the world. He is currently Treasurer of the International Democrat Union.

> His recent writings for ConservativeHome are here. More information at LordAshcroft.com.

Stephan Shakespeare is founder and Chief Executive Officer of the YouGov polling organisation, one of Britain's most successful internet companies and now established in America. A former parliamentary candidate, expert on London politics, he now chairs the Network for the Post-Bureaucratic Age. Stephan was the first investor in ConservativeHome, sustaining it in its embryonic years.

> His recent writings for ConservativeHome are here.

Send Ideas/Tips to the Editor

Donate to ConservativeHome / Subscribe to the Early Elephant daily email

Why does ConservativeHome have those shields up there?

What we do and what we believe