« Newslinks for Wednesday April 18: More evidence that Republicans are rallying to Romney | Main | Newslinks for Friday April 20: Only 24% (RECORD LOW) think USA is on right track »

"Mitt Romney has closed the gap with President Obama among registered voters, a CBS News/New York Times poll released Wednesday found, putting the former Massachusetts governor in a dead heat with the president for the White House. Mr. Obama and Romney each received support from 46 percent of registered voters when asked who they would vote for if the election were held today." - CBS News

Karl Rove: How Romney can beat the Buffett Rule

"We may be at a political tipping point where acts confirm impressions that become impossible to shake. Mr. Obama is in danger of being seen as weak, inept and not up to the job. If Mr. Romney calls the president out on his small-minded political games and pivots to an ambitious reform agenda, he will make it much more likely that, come next January, Mr. Obama can turn his attention to writing his third autobiography." - Karl Rove for the WSJ

Santorum likely to meet with Romney in the next two weeks

"Senior Strategist to the Santorum campaign John Brabender told Andrea Mitchell today on MSNBC that he just spoke with Romney’s campaign manager and started to float a few dates for a meeting to take place between the former rivals, likely in the next two weeks in Philadelphia. “It has been made clear to us that the Gov. Romney would like to have at least a discussion of a possible endorsement at that time," Brabender said." - MSNBC

More signs of the conservative movement rallying around Romney

"Not too long ago, it appeared this week's meeting of the Republican National Committee in Arizona might be consumed with squabbles about delegate math and anxious hand-wringing over the long and acrimonious presidential primary fight. Instead, it's looking more and more like a Mitt Romney pep rally in the making." - CNN

Important reminder: there are still plenty of primaries left

"Some commentators have asked whether or not we may see a significant protest vote against Romney in these remaining contests. With evangelical-heavy states such as Texas and North Carolina on the docket, it could be considerable in some states." - Sabato's Crystal Ball

"The Republican-controlled House on Wednesday passed a transportation bill that would advance the controversial Keystone XL pipeline, defying a White House veto threat and stoking an election-year fight over what Congress can do about gas prices." - LA Times 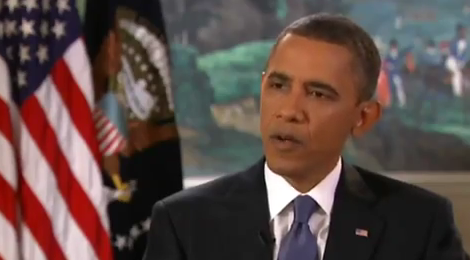 "With general-election campaigns gearing up, President Obama on Wednesday aimed to craft a sharp contrast between himself and his likely GOP opponent, Mitt Romney, telling an Ohio crowd, “I wasn’t born with a silver spoon in my mouth.”" - The Hill

"The big news last week from the Summit of the Americas was the Secret Service sex scandal, which had some in the Obama administration lamenting that no one paid much attention to Barack Obama’s efforts in Cartagena, Colombia to improve relations between the US and its allies.  Today, the White House might be hoping for a little more attention to the scandal.  After punting on an opportunity to defend the UK and the principle of self-determination over the Falkland Islands dispute with Argentina, Obama and his team got caught flat-footed by the nationalization of a Spanish oil company by Argentina’s government"- Hot Air