"President Obama has opened the first significant lead of the 2012 campaign in the nation's dozen top battleground states, a USA TODAY/Gallup Poll finds, boosted by a huge shift of women to his side." 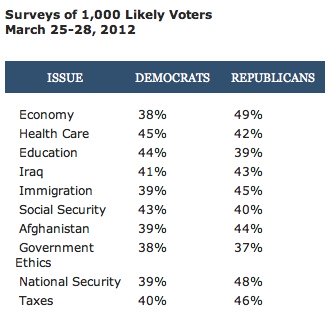 "As they have for nearly three years now, voters trust Republicans more than Democrats when it comes to handling the economy, by far  the top issue on a list of 10 regularly tracked by Rasmussen Reports.  They put slightly more trust in Democrats on health care, the second most important issue." - Fox

"For three years now, voters have widely preferred Republican approaches on the economy, as well as national security, taxes and immigration" - PowerLine

"Rick Santorum fought Sunday to downplay Mitt Romney's growing list of endorsements from Republican Party figures, dismissing the support as the work of an "establishment" pushing the party to nominate another "moderate" just like John McCain in 2008." - Fox

Jonathan Tobin wonders if Santorum's real focus is 2016: "Listening to Santorum in recent days, it occurs to me that perhaps he thinks it is more important to be able to say “I told you so” in the event of a Romney loss in the general election than to be a “team player” during the primary endgame"

Every Bush has endorsed Romney, except George W 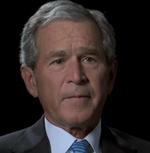 "His absence is no accident. The Republican Party has done everything in its power to separate itself from its former leader, who left office with abysmally low approval ratings that helped boost President Obama to a decisive White House win." - National Journal

Chris Cillizza: Romney's VP will be Christie, Jindal or Rubio

"Mitt Romney won’t make his vice presidential pick for a few months yet. But if history is any guide, we already know who he will choose: a conservative... The key is that the pick would have to be considered a conservative by conservatives’ own standards — someone with the record and the temperament to placate any lingering doubts about Romney. It would have to be someone whom conservatives would be genuinely excited about. Three people currently mentioned in the great process that is the vice presidential sweepstakes fit that description to a T: Sen. Marco Rubio of Florida, Louisiana Gov. Bobby Jindal and New Jersey Gov. Chris Christie." - Washington Post

"Hispanics are by far the fastest-growing segment of the population and are a key voting bloc in many swing states including Florida, Nevada and New Mexico" - The Hill

Republicans consider how they can boost support among Hispanics

"Sen. Marco Rubio (R., Fla.) is developing a scaled-back version of the Dream Act, which would allow people brought to the U.S. as children to gain legal status, but not citizenship, if they enroll in college or the military. Several Senate Republicans have signed on to bipartisan legislation aimed at broadening access to the legal immigrant visa system." - WSJ

"Republicans will have a better chance at capturing Wisconsin in November thanks to the campaign they’re waging now to keep Gov. Scott Walker in office, Republican National Committee Chairman Reince Priebus argues in a memo set for release Monday" - Politico

A Republican-controlled Senate in 2012 looks less likely than it did a few weeks ago, but the prospect for GOP gains is still quite solid - Jim Geraghty at NRO looks at the competitive states, one-by-one

What William F. Buckley Would Think of Today’s GOP - Geoffrey Kabaservice for TNR

And finally... Paul Ryan and campaign staff play April Fool on Romney - introducing him to an empty hall - WSJ

Posted at 06:33 AM in Newslinks | Permalink
Reblog