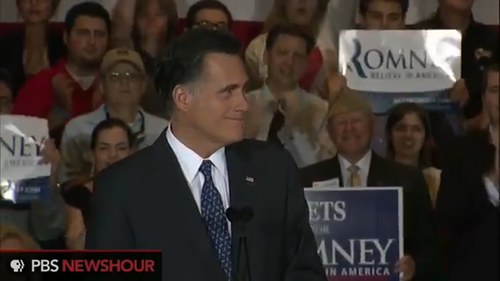 "In Mitt Romney's decisive Illinois victory Tuesday, the campaign got some encouraging signs from segments of the GOP that have, in the past, been reluctant to support him. Early exit polls showed him beating Rick Santorum among self-identified conservatives, voters who support the Tea Party, and even people making less than $50,000 per year. But one stubborn Republican faction refused to join the rest on the Romney bandwagon: white Evangelical Christians." - BuzzFeed

"It's been a rough few days for the former Pennsylvania senator. On Tuesday, he was forced to distance himself from an earlier comment suggesting he didn't care about the country's unemployment rate. Over the weekend in Puerto Rico, he had to repeatedly explain his position on whether islanders would have to speak English if they want to become a U.S. state. And he had to answer questions about a fiery pastor who introduced him at a church service in Louisiana while suggesting that America is a Christian nation." - AP

"Both Republicans eyeing a sooner-the-better end to the bloody GOP battle and Santorum himself are increasingly looking to the April 24 Pennsylvania contest, with 72 delegates and home state supremacy at stake, as a crucial pivot point. “How does Rick Santorum continue if he were to lose among his home state primary voters?” asked Rep. Peter Roskam (R-Ill.), an unaligned member of the House GOP leadership. “Where’s the momentum coming out of that?”" - Politico

"Louisiana, which will hold the next Republican primary on Saturday, is a much more balanced picture. According to new data from a Republican who monitors media spending, Mr. Santorum and the Red White and Blue Fund, the pro-Santorum super PAC, have committed nearly a half-million dollars to advertising on broadcast television, cable and radio there." - New York Times

"The Las Vegas mogul and his wife put another $5 million into the super PAC in February, according to Federal Election Commission reports filed Tuesday. His daughter, Shelley Adelson, donated $500,000. Altogether, the Adelson family has given Winning Our Future $16.5 million out of the $18.8 million it has raised." - LA Times

The other Illinois primaries: Eric Cantor's Illinois intervention a success 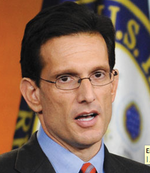 "Branding himself as a new kind of conservative, Adam Kinzinger bested two-decade veteran Don Manzullo in the first Republican member-on-member race of the 2012 cycle. The ugly GOP primary fight drew some strange lines in the sand: On one side were tea-party groups with Manzullo, despite the fact they had rallied around Kinzinger in 2010. And on the other were House Majority Leader Eric Cantor and Kinzinger, a freshman and rising Republican star." - Politico

"Mr. Obama's campaign reported $85 million in reserves at the end of February, an increase from $76 million at the end of January, according to February campaign-finance reports filed Tuesday. That is more than six times the amount of money that the entire Republican field had in the bank" -WSJ ($)

Obama debt hole deeper than George W. Bush's in less than half the time

"The United States is offering some breathing room in its seemingly ironclad set of sanctions against Iran, underscoring the difficulty the U.S. and other countries may have in truly freezing out the Iranian regime. The State Department on Tuesday announced exemptions for 11 countries from the newly passed economic sanctions expected to hit Iran's financial and energy sectors." - Fox News

Posted at 07:59 AM in Newslinks | Permalink
Reblog