Newslinks for Thursday March 29: Rubio and Bush Snr both endorse the "inevitable" Romney 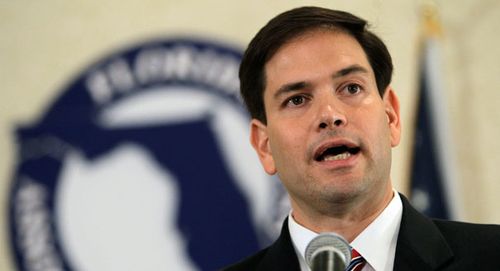 “I have zero doubt in my mind of two things: No. 1, that Mitt Romney will govern as a conservative, and No. 2, that he will be head and shoulders better than the guy who’s in the White House now” - Rubio quoted by the Washington Post

"Both the former first lady, Barbara Bush, and one of the president’s sons, former Florida Gov. Jeb Bush, have already thrown their support behind Mr. Romney. The elder Mr. Bush’s endorsement is sure to offer a boost to Mr. Romney’s argument that he is the inevitable Republican nominee. His campaign has dwarfed rival Rick Santorum‘s in the delegate fight and the latest polls show Mr. Romney well positioned as the race moves to Wisconsin." - WSJ | Fox "Rick Santorum has eased up on using phrases like “worst Republican in the country” when tearing into Mitt Romney. And he is no longer saying that a vote for Mr. Romney would be basically the same thing as a vote for President Obama" - New York Times

"In a major disappointment to those hoping Congress will strike a grand bargain to cut deficits through spending cuts and tax revenues, a budget proposal designed around those principles was supported by only 38 House members Wednesday night" - Washington Post

"The mess that is ObamaCare is not going away. The president's handling of it will deeply affect his re-election chances" - Karl Rove in the Wall Street Journal

"Mitt Romney’s job in a post-Obamacare world is to show voters what his alternative would be. In a recent op-ed in USA Today, he begins to set this out: tax benefits for individuals purchasing insurance outside their workplace; more competition and consumer choice for insurance plans; medical-malpractice reform; interstate insurance options; and state-determined insurance protection for those with preexisting illnesses. All this is a good start. Rather than a government-run health-care reform, Romney is pushing a market-run reform, which has long been a Republican idea." - Larry Kudlow for NRO

Pete Wehner on Commentary: "Listening to the oral arguments on the Supreme Court during the last three days is a reminder of why it is, in many respects, the intellectual crown jewel for conservatives, and why it’s vital that those appointed to the high court aren’t simply reliable votes but are capable of making compelling arguments."

Rep. Bobby Rush, D-Ill., was escorted off the U.S. House floor today for wearing a hoodie as he protested the shooting of Trayvon Martin

American Spectator: "I usually stick to commenting on events abroad, but I was shocked to see Rep. Bobby Rush (D-Ill.) address his fellow members clad in a "hoodie" in an unvarnished cry for media attention, capitalizing on the death of Trayvon Martin. He was dismissed from the floor, but not before donning his sunglasses."

Posted at 06:15 AM in Newslinks | Permalink
Reblog