Yesterday we published the first results of ConHomeUSA's latest survey. Those showed that Rick Santorum was up to third place in the race for the GOP nomination.

Today we publish a new tracker poll where, every few weeks, we will track the popularity of key players in conservative politics.

We asked the Republican Panel* to give key organizations and people a thumbs up or thumbs down. The table below summarizes the results. 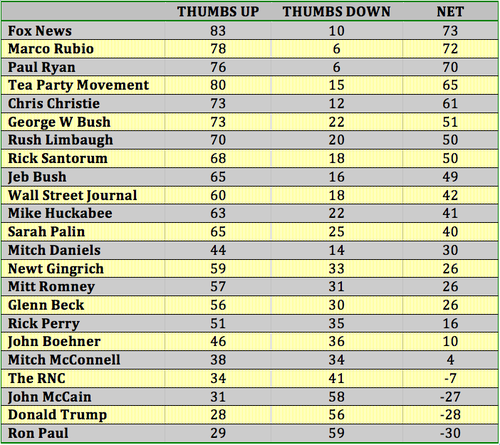 > CLICK HERE TO SUBSCRIBE TO CONSERVATIVEHOME'S DAILY EMAIL AND GET ALL THE MOST IMPORTANT GOP NEWS DELIVERED TO YOU BY 7:00AM EST EVERY WEEKDAY.

Posted at 02:37 AM in Republican Panel | Permalink
Reblog