Michelle Bachmann, Rick Santorum have a strong debate performance in the debate over foreign policy, while  Cain stumbles. Ron Paul challenges his rivals on waterboarding.

“Overall, Bachmann’s performance was solid. The Minnesota congresswoman’s best line was about Occupy Wall Street and Israel. ‘President Obama has been more than willing to stand with Occupy Wall Street,” Bachmann said, “but he hasn’t been willing to stand with Israel. Israel looks at President Obama, and they do not see a friend.’”- Weekly Standard

Is Rick Perry back in the game? Most estimations show that the Texas governor exceeded expectations in Saturday night’s foreign policy debate.

“Perry had the most riding on his performance, and he skillfully bantered with the moderator when asked where he would house the nuclear weapons program if he disbanded the Energy Department. ‘Glad you remembered it,’ he quipped. ‘I had some time to think about it,’ deadpanned CBS anchor Scott Pelley. ‘Me too,’ Perry said.,” columnist Eleanor Clift writes in the Daily Beast.

“Former Secretary of State James A. Baker III said Thursday that Mitt Romney would be the Republicans’ strongest nominee against President Obama, arguing that the former Massachusetts governor’s private-sector experience would resonate with voters in swing states.” – Washington Times

Pro-Obama group says Mitt Romney has always been pro-life and denies accusations that he has flip-flopped on abortion.

“Mitt Romney's not a flip-flopper on abortion after all, a top Democratic campaign group said Saturday. Priorities USA, the pro-President Obama political organization led by a former White House press aide, argued in a memo that the Republican presidential candidate has been pro-life all along -- throughout his time as governor of Massachusetts and as a two-time presidential candidate.” – Fox News

Romney could win the GOP nomination without the South –   W. James Antle writes on the American Spectator blog

Will Democrats lose their lock on Hawaii’s Senate seat for the first time since achieving statehood in 1959? 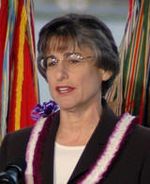 “Republican Linda Lingle, a former two-term governor, has emerged as a formidable force, running neck and neck with Democratic contenders Rep. Mazie Hirono and Ed Case, a former congressman. Losing Akaka’s seat, which he’s held for more than two decades, would be a major blow to Democrats. Since it became a state in 1959, Hawaii has elected a Republican senator only once – Hiram Fong in 1959 – and a Republican House representative only twice. Currently, all four of its delegates – two in the Senate and two in the House – are Democrats.” – ABCNews

Political correctness strikes as the U.S. Senate moves to shut down a religious freedom watchdog that has monitored abuses in the Islamic world for the past decade.

“For more than a decade, an independent, statutory monitor has been advising the U.S. executive and legislative branches on international religious freedom, drawing attention to the persecution of people of faith under Muslim, communist and autocratic regimes from Riyadh to Rangoon. But by this time next week, it may have to close its doors.” – CNSNews.com

Police around the country move to crackdown on Occupy Wall Street movement protests amid reports of violence and other criminal activities.

“The ‘Occupy Wall Street’ movement, now into its third month, has seen incidents of recent violence, including deaths related to drug use, street fights, and suicide as well as sexual and other assaults. As health and safety concerns grow, city officials around the country are moving to break up protest encampments.”- Christian Science Monitor