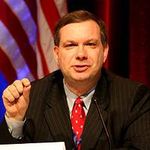 John Rossomando on The Republican: Tony Blankley to ConHomeUSA: Gingrich would deliver the biggest conservative agenda since Reagan if elected president

“The essence of the plan was to dramatically reduce the deductions and credits wealthier taxpayers can claim to reduce their tax liability. That would generate enough revenue to both permanently reduce marginal rates for all taxpayers and provide more than $250 billion for deficit reduction. Added to other receipts, taxes and fees, the Republican plan amounted to more than $500 billion in deficit reduction revenue and $900 billion in spending reductions. We believe this lowering of the rates and broadening of the tax base would have spurred economic growth, created jobs and, in the process, generated billions more in revenue from growth in the economy.” – Washington Post

An Assad collapse in Syria would bring the Muslim Brotherhood to power. 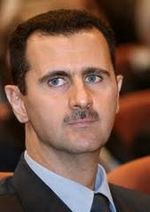 “Somewhere, probably in hell, Hafez al-Assad is biting his fingernails, hoping that his son, Bashar, remembers his history lessons. Because this is not the first time that an Assad ruling Syria has faced mounting opposition protests, deadly attacks on government personnel and installations, and army defections. A similar uprising occurred in the 1970s and early 1980s, under Assad senior’s watch.” - Forbes

“Air Force spokesman Michael Dickerson explained to TheDC that “selective continuation” is the process which has resulted in the premature separation of these 157 majors. According to Dickerson, officers who fail to get a promotion two times in a row are subject to involuntary discharge — unless they are within two years of qualifying for retirement. Officers subject to discharge can be retained if tapped for continuation by a selection board — it is at these selection boards where officers six years to retirement normally are retained.” – Daily Caller

Risks abound for the U.S. in the Obama administration’s push for a transition to civilian rule in Egypt.

“In so doing, the president opened up a litany of risks, exposing a fault line between the United States and the Egyptian military which, perhaps more than any other entity in the region, has for 30 years served as the bulwark protecting a critical American concern in the Middle East: the 1979 Camp David peace treaty between Egypt and Israel.” – New York Times

GOP subsidizes McMansions as no one pays attention.

Almost two weeks ago, when they figured no one was watching, the Republican-dominated House of Representatives, by an overwhelming 292–121 margin, voted to increase funding for the Federal Housing Administration. Just as government debt hit $15 trillion, edging closer to 100 percent of GDP, these self-proclaimed scourges of spending decided Uncle Sam should continue subsidizing mini-mansion mortgage loans — up to nearly three-quarters of a million dollars,” Andrew McCarthy writes at National Review Online

Krauthammer blasts Ron Paul’s foreign policy positions for being stuck in the 1920s.

“Washington Post columnist Charles Krauthammer doesn’t have a problem with any of the GOP presidential hopefuls’ policy stances, except for those held by libertarian-leaning Texas Rep. Ron Paul. On this weekend’s broadcast of ‘Inside Washington,’ Krauthammer criticized Paul for what he suggested was an antiquated view of foreign policy. ‘Probably everyone except Ron Paul, who is living in the 20s, who thinks we can have a moat around the United States and if we ignore the world, the world will ignore us,’ Krauthammer said. ‘I don’t think there is a lot of division.’”- Daily Caller

A stark generational gap faces America for the 2012 elections.

“It’s well known that the U.S. is rife with political division: red vs. blue, the coasts vs. the interior, cities vs. rural areas, the 1% vs. the 99%. Less discussed is the yawning gap that has recently opened between young and old. America today is more politically divided by age than it has been in 40 years, according to a major new survey by the Pew Research Center,” Michael Crowley writes in Time’s Swampland blog

“Media coverage of conservatives is again in the spotlight, with the furor over the treatment of presidential candidate Rep. Michele Bachmann (R-Minn.) on the “Late Night with Jimmy Fallon” TV show. Fallon’s house band, The Roots, played a segment of Fishbone’s “Lyin’ Ass Bitch” to accompany Bachmann’s stage entrance Monday night. Bachmann was unaware of the musical reference at the time, but later described the incident as “an outrage” and “clearly a form of bias on the part of the Hollywood entertainment elite.” – The Hill

Republicans must settle on one candidate to beat Obama.

“President Barack Obama’s approval ratings are improving steadily, and the Republicans need to rally around one candidate if they hope to beat him, GOP pollster John McLaughlin tells Newsmax.TV. After falling, Obama’s approval rating has rebounded to 47 percent, while 51 percent still disapprove of his job performance. Although the numbers show he is vulnerable, they are drastically changed from this time last year, when his approval ratings were in the 60 percent range, McLaughlin said …” – Newsmax

Romney campaign vows to tie Obama in knots in the wake of their recent ad attacking the president on the economy.

“’We get it,’ said the aide.  ‘We will tie them in knots.’ There's little doubt the use of the Obama quote in Romney's first ad -- which played only for a short time and only in New Hampshire -- was a deliberate provocation from the Romney campaign.  On November 21, the Romney press shop sent out a release announcing the ad and detailing where each of its soundbites came from.  The press release made clear -- as the ad itself did not -- that the Obama soundbite in question came from a speech in which Obama was quoting McCain.  Romney's spokeswoman Gail Gitcho, wrote a blog post on the same day explaining that ‘the tables have turned’ and that Obama today is doing the same thing he accused McCain of doing in 2008 -- avoiding the topic of the economy.”, Byron York writes in the Washington Examiner