Poll: Romney seen as most electable, but still struggles to break out of pack

"Romney’s lack of traction carries well beyond the head-to-head matchups with other competitors. It also is reflected on discrete issues and candidate attributes. Considerable numbers of Republicans and GOP-leaning independents consider the health plan that Romney signed into law in Massachusetts and his Mormon religion as strikes against him. The survey tested the candidates on six attributes or characteristics. Romney has a sizable lead in just one: One-third of Republicans and GOP-leaning independents say he has the best chance of anyone in the field to defeat Obama in 2012." - Washington Post

"Obama won three states — Indiana, North Carolina and Virginia — that no Democrat had carried at the presidential level in at least two decades, and he scored victories in six other states (Colorado, Florida, Iowa, Nevada, New Mexico and Ohio) that George W. Bush had won in 2004. Those nine states will account for 112 electoral votes in 2012 and stand at the center of the fight for the presidency. If Obama loses every one of them but holds on to the others he won, he will drop to 247 electoral votes and Republicans will win the White House. ... But with the exception of Indiana and its 11 electoral votes, Obama is very much in the game in those states." - Washington Post

Stephen Moore: A look inside the deficit supercommittee

"Insiders on the panel say that the deal being offered by Democrats is less than $1 of spending cuts for every $1 of new taxes. Democrats want to count the $900 billion of discretionary spending cuts already agreed to in the debt bill and $1 trillion in troop withdrawals from Afghanistan and Iraq, which may not happen. Meanwhile they are insisting on close to $1.2 trillion of tax increases in exchange for less than $1 trillion in entitlement reforms. The president's own deficit reduction committee, Simpson-Bowles, offered $2 of cuts for every $1 of new taxes. The GOP House budget passed last spring contained some $4.5 trillion in cuts—three times more than the super committee must find." - Stephen Moore for the WSJ

John Boehner: We need to restructure our tax code to stay competitive 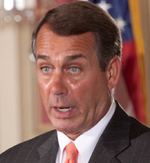 "'I believe that if we restructure our tax code, where on the corporate side and the personal side the target would be a top rate of 25 percent, it would make our economy more competitive with the rest of the world,' ...  'We’d have a broader base on the tax rules,' he said. 'And out of that, there would be real economic growth and more revenues for the federal government.' Asked about a tax increase for millionaires, Mr. Boehner, an Ohio Republican, said such a levy would fall on small businesspeople and slow economic growth." - WSJ

"Labor is poised for a big victory in Ohio Tuesday.  PPP's final poll on Issue 2 finds 59% of voters plan to reject Senate Bill 5, with only 36% voting for approval. What might be most remarkable about the 23 point margin in this poll is that it's exactly identical to what we found the first time we polled on this issue all the way back in March. Voters were furious then and that anger has continued all the way to November." - PPPolling

"Intelligence provided to U.N. nuclear officials shows that Iran's government has mastered the critical steps needed to build a nuclear weapon, receiving assistance from foreign scientists to overcome key technical hurdles, according to Western diplomats and nuclear experts briefed on the findings. ... The U.N. nuclear watchdog is due to release a report this week ... Iranian officials expressed indifference about the report. ... IAEA officials ... have concluded that Iran 'has sufficient information to design and produce a workable implosion nuclear device' using highly enriched uranium as its fissile core." - Washington Post

"Defense Secretary Leon E. Panetta is considering reductions in spending categories once thought sacrosanct, especially in medical and retirement benefits ... Mr. Panetta said Pentagon strategists were looking at additional cuts in the nuclear arsenal, with an eye toward determining how many warheads the military needed to deter attacks. Mr. Panetta also held out the possibility of cutting the number of American troops based in Europe, with the United States compensating ... by helping NATO allies improve their militaries." - New York Times