Losing the payroll tax holiday could cost the average family $1,000 in new taxes, according to President Obama, but Republicans are beginning to question the holiday’s stimulative effect on the economy

"“The payroll tax holiday has not stimulated job creation,” said Senator Jon Kyl while on “Fox News Sunday.” “We don’t think that’s a good way to do it.” Congress has until the end of the year to extend the payroll tax holiday. If it fails to act businesses will likely increase the amount of money that is taken out of your paycheck to pay for Social Security taxes." - ABC

"In a 354-word, front-page editorial Sunday, the New Hampshire Union Leader finally did what no Republican presidential candidate has yet been able to accomplish: make the case against Mitt Romney... In an apparent allusion to Romney, the publisher acknowledged that Gingrich is not “perfect” but explained: “We would rather back someone with whom we may sometimes disagree than one who tells us what he thinks we want to hear.” - Politico

"Despite the endorsement, Gingrich is unlikely to place first in New Hampshire, where Romney has been campaigning aggressively for years among the socially moderate voters in a state where he took 41 percent to Gingrich’s 14 percent in a recent Suffolk University/7 News poll." - The Hill

"Speaking to an overflow crowd here this weekend, Republican presidential candidate Newt Gingrich did not back down from his call for a "path to legality" for illegal immigrants who have lived in the United States for 25 years or more and who have established family and community ties. The former speaker of the House also scolded his GOP rivals for calling his proposal amnesty." - CBS

"Members of the Republican money machine that powered presidential elections from their time as “Rangers” for George W. Bush are betting almost entirely on Mitt Romney, but a large majority has so far sat out of the 2012 race altogether." - Washington Times

Legal Insurrection is unimpressed with Politico's role in the allegations against Herman Cain. 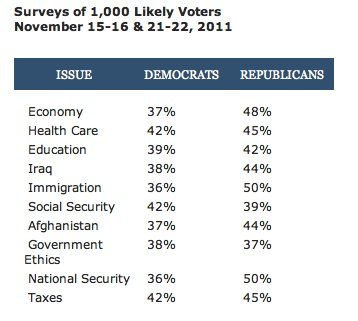 BUT more voters blame GOP for supercommittee failure: "Dig beneath the surface of Gallup’s new poll showing that 55 percent of Americans blame both parties for the failure of the supercommittee, and you’ll see the remaining breakdown leans decidedly against the GOP: 24 percent say Republicans were to blame, while 15 percent point the finger at Democrats. Among independent voters the split is even starker: 21 percent say the GOP was to blame, while just 9 percent say Democrats were the primary problem." - Daily Beast

...BUT reports the New York Times, conservative groups have spent $13 million attacking Obama in last six months... "Total television advertising spending on the 2012 election cycle could top $3 billion, up from $2.1 billion four years ago fueled in part by the rise of independent groups that can raise and spend unlimited amounts of money on campaigns."