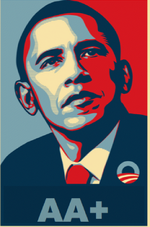 4:30pm The Republican: Leading from Alice in Wonderland? President Obama overrules the S&P, offers to fix the mess by taxing the rich and making "modest" changes to Medicare

2:30pm The Republican: Why Obama needs to be worrying about Europe 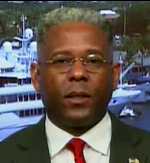 1:30pm Video: Rep. Allen West: The "Tea Party downgrade"? The debt has gone up over $3 trillion since those using that term took over in Washington

Ryan Streeter on The Republican: In defense of Rick Perry’s “The Response” event "The downgrade of the United States government’s credit rating by Standard & Poor’s is almost sure to increase pressure on a new Congressional “supercommittee” to mute ideological disagreements and recommend a package of deficit-reduction measures far exceeding its original goal of at least $1.5 trillion, lawmakers said Sunday. Even before the panel is appointed, its mission is expanding. Its role is not just to cut the annual budget deficit and slow the explosive growth of federal debt but also to appease the markets and help restore the United States’ top credit rating of AAA. Otherwise, taxpayers may eventually have to pay more in interest for every dollar borrowed by the Treasury." - New York Times

"Democrats and Republicans are already disagreeing about what they agreed to in the recently signed-into-law deal to raise the debt ceiling, and not surprisingly, taxes are at the heart of the dispute. Though the members of a new Joint Committee on Deficit Reduction haven’t yet been named, House Republicans and the White House have battled over budget assumptions in a wonk-vs.-wonk showdown over whether the committee would be able to raise taxes. Of course, the issue of taxes and whether to raise them to cover the current budget shortfalls has proved to be one of the insurmountable issues between the parties during the debt and deficit debate. It’s the reason Speaker John Boehner (R-Ohio) twice walked away from talks with President Barack Obama, the reason House Majority Leader Eric Cantor (R-Va.) bowed out of bipartisan negotiations led by Vice President Joseph Biden, and ultimately, it’s the reason tax revenues were not addressed in the debt limit deal signed last week by Obama." - Roll Call ($)

> Yesterday on The Republican: What they're saying: Reacting to the US credit downgrade, GOP freshmen once again make the case for 'Cut, Cap, Balance'

"The European Central Bank signaled on Sunday that it would intervene more aggressively in bond markets to protect Spain and Italy, and leading finance ministers conferred about the mounting threats to the world’s economies, as policy makers sought to calm markets unnerved by deteriorating public finances and slow economic growth. The shock of the downgrade Friday of long-term United States government debt and the worsening situation in Europe added new urgency to the efforts to restore confidence and prevent an extension of the stock market slide that began last week." - New York Times | Washington Post 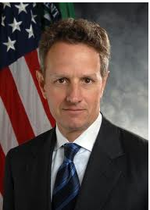 "Timothy Geithner told President Obama that he plans to remain in his position as Treasury secretary, ending weeks of speculation that he might leave, and began working to reassure investors after the nation's first credit downgrade. Sunday evening in an interview with NBC News' John Harwood, Geithner explained his decision to stay at Treasury. 'I believe in this president, John. I believe in what he's trying to do for the country. I love my work. And I think if a president asks you to serve, you have to do it,' said Geithner. Geithner also had tough words for lawmakers. "Congress ultimately owns the credit rating of the United States. They have the power of the purse on the Constitution. And they're going to have a chance now to-- to earn back the confidence of investors around the world." He argued that the protracted debt-ceiling negotiations had a harmful effect on Standard & Poor's decision." - The Hill

> Yesterday on The Republican: Although he says he's staying put, Republicans insist that it's time for Geithner to go

"Standard & Poor's faulted political entrenchment in Washington for this weekend's U.S. credit rating downgrade, but it was lawmakers on Sunday bickering over S&P's move that provided insight into how such a decision could be reached" - Fox News

> Yesterday on Video: Sen. Lindsey Graham: If Obama were in the Southeastern Conference, he'd be fired as a coach

"The most important week of the 2012 presidential race so far begins now. Whatever happens in Thursday’s debate and Saturday’s straw poll in Ames, the Republican field is likely to be narrowed. No candidate will come out of Ames the same as he or she went in. Some may not come out at all. And one will emerge as the top challenger to Mitt Romney, whose decision not to compete in the straw poll turned the voting largely into a contest between Tim Pawlenty and Michele Bachmann. The week will also be key for Rick Perry, the Texas governor who’s been weighing a run, but won’t be on the Ames ballot. The less strength everyone else in the field shows, the wider the opening for him to get in. For all its detractors who claim the straw poll has little predictive value, it has shaped every Republican presidential race for years. Even those who skipped competing — Romney, Newt Gingrich and Jon Huntsman — won’t be able to ignore the results. And those votes won’t be cast until after the debate — Huntsman’s first — two days before Ames." - Politico

...as the president's mid-month Midwestern caravan prepares for a bumpy ride - Politico

With a new House map, GOP looks for major gains in North Carolina

"North Carolina’s new House map, passed into law two weeks ago, seeks to unravel several decades of Democratic-led gerrymandering. Even Democrats privately admit the state GOP appears to have done a masterful job. Four Democrats — Reps. Mike McIntyre, Larry Kissell, Heath Shuler and Brad Miller — are exceedingly vulnerable under the new map, mandated by the decennial redistricting process. Worse for Democrats, McIntyre was drawn into Kissell’s district and Miller was drawn into Rep. David Price’s (D) district. Even with President Barack Obama holding the Democratic National Convention in Charlotte and even if, 15 months from now, he rides to a comfortable re-election victory, it’s unclear that his coattails can buoy the four Blue Dog Democrats whose districts are now in substantially Republican turf." - Roll Call ($)

Meanwhile, in Florida, "both parties are gearing up to to wage a fierce battle for the state’s Hispanic vote. For Democrats, the president’s reelection may ride on their success" - Miami Herald

"Seeing “no clear path” toward reauthorizing the “No Child Left Behind” education law, the Obama administration will unilaterally issue waivers to states, exempting them from some of the law’s regulations. “Today we’re less than a month from the start of the school year, and…we still believe there is no clear path toward a bipartisan bill to reform “No Child Left Behind,” said White House domestic policy adviser Melody Barnes in a conference call with reporters, the contents of which were embargoed until Monday." - Politico