6:30pm The Republican: And in other predictable news, Rick Perry dominates another national poll - this one by CNN

3:00pm Video: "No apologies": NBC's preview of its exclusive Dick Cheney interview in which he says wiretaps and waterboarding were the right things to do

12:15pm Video: George W. Bush: Ground Zero was "like walking into hell," with "palpable bloodlust" in the air

11:00am The Republican: Three important reads as we anticipate Obama's jobs agenda:

Ryan Streeter on The Republican: Party of Change, and the Party of Stasis: Three things that should be separating Republicans from Democrats going into 2012 "House Republicans are planning votes for almost every week this fall in an effort to repeal environmental and labor requirements on business that they say have hampered job growth. With everyone from President Obama to his Republican challengers in the 2012 campaign focusing on ways to spur economic growth, House Republicans will roll out plans Monday to fight regulations from the National Labor Relations Board, pollution rules handed down by the Environmental Protection Agency and regulations that affect health plans for small businesses. In addition, the lawmakers plan to urge a 20 percent tax deduction for small businesses." - Washington Post

Obama to 'double down' on jobs message - Washington Examiner

"A bloc of conservative House Republicans is planning to unveil a jobs agenda to rival a forthcoming proposal by President Barack Obama — attaching “growth” to its trademark Cut, Cap and Balance plan. But the group, the Republican Study Committee, headed by Rep. Jim Jordan, is treading gingerly on what its proposal will include in the wake of a backlash caused by some of its aggressive moves during negotiations over increasing the debt ceiling." - Roll Call ($)

Rep. Ron Paul: Bernake is out of options 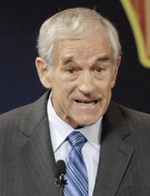 "Chairman Ben Bernanke is not calling for another fix to the economy by the Federal Reserve because he's already used up all the quivers in the Fed's bow, Rep. Ron Paul said Sunday. Paul is a 2012 Republican presidential candidate and supports the U.S. returning to the gold standard to protect its currency and force a balanced budget. He has been highly critical of the Federal Reserve and its chairman over plans for "quantitative easing," a two-part program which flooded the market with dollars in an attempt to make money more available for borrowing and lending.  Paul argued that Bernanke's plan to buy bank assets and drop more than $2 trillion into the economy did not yield the results the chairman hoped, a conclusion that Paul says Bernanke implicitly acknowledged during a speech last week in which he offered no new bailout programs from the Fed." - Fox News

> Yesterday on Video: Rep. Ron Paul slams FEMA: "It is a system of bureaucratic central economic planning which is a policy that is deeply flawed"

"Irene shut down Broadway, took a bite out of Hollywood's box office, closed casinos in New Jersey and canceled thousands of East Coast flights. But the economic fallout had been predicted to be far worse. The full cost of the storm, which caused widespread flooding and has so far resulted in at least 22 deaths, was still uncertain as insurance experts began tallying the estimated damage Sunday. Overall, the storm, which was downgraded from a hurricane to a tropical depression Sunday, could cost insurers $1.5 billion to $3 billion to cover claims for damaged homes, vehicles and businesses, said Jose Miranda, director of client advocacy at Eqecat Inc., a catastrophic risk management firm in Oakland. Total damage, including uninsured losses, could range from $5 billion to $7 billion, he said." - LA TImes

> Yesterday on Video: Gov. Chris Christie weighs in on hurricane response efforts: "The key is we’ve tried to keep people informed, be fully transparent, to lower fear and raise confidence, and I think that’s the best thing a governor can do in this"

"Texas Gov. Rick Perry, like most of the other the GOP presidential hopefuls, says his campaign is about undoing the decisions of President Obama. But Perry also presents a stark alternative to the last Republican to occupy the White House, his fellow Texan George W. Bush. In his writings and speeches before he entered the race, Perry shared the view, widely held among conservatives, that Bush’s government spending habits in office were a betrayal of the GOP’s core fiscal principles. But Perry went further, dismissing “compassionate conservatism,” the central tenet of Bush’s domestic policy, as just more overreach by the federal government." - Washington Post

Perry on Social Security: "It is a Ponzi scheme for these young people. The idea that they're working and paying into Social Security today, that the current program is going to be there for them, is a lie" - Houston Chronicle

"While the field for the Republican presidential nomination is crowded and up for grabs, many pundits and politicos are ready to proclaim a front-runner for the ticket’s second spot — Florida’s Sen. Marco Rubio. “There are very few candidates that have such a broad Republican appeal and a chance to reach voters that Republicans are having a hard time” winning over, said Florida Atlantic University political science professor Kevin Wagner. Mr. Rubio, 40, has served in the Senate for less than eight months and the 2012 Republican National Convention is a year away. But for now the dapper, articulate and ambitious Miami native — who is admired by tea party activists and the party’s establishment alike — is the sexy choice for the GOP’s vice presidential candidate." - Washington Times

> Yesterday on The Republican: Cain comes out on top in home state straw poll

"Retreating loyalists of Muammar Qaddafi killed scores of detainees and arbitrarily shot civilians over the past week, as rebel forces extended their control over the Libyan capital, survivors and a human rights group said Sunday" - CBS News

Iran's Ahmadinejad: No place for Israel in region - Fox News

Ross Douthat: Some points to keep in mind when asking politicians about faith - New York Times