7:00pm The Republican: Happy 15th anniversary, welfare reform: Amazing how easy it is to forget that historic achievement in 1996, isn't it?

5:00pm The Republican: Disquieting truth about the future: New data on marriage breakdown today spells trouble for all of us tomorrow

3:30pm The Republican: Thanks to all of our readers who encouraged Paul Ryan to run

3:10pm The Republican: PAUL RYAN WILL NOT RUN FOR PRESIDENT

12:00pm Video of the day: Would Chris Matthews do this if Obama asked? Libyan news host brandishes gun on air to warn the rebels

10:45am The Republican: Reflections from Peter Feaver and Walter Russell Mead on Libya and the comparisons between Obama and Bush

Ryan Streeter on The Republican: The Republican candidate in 2012 who is unafraid to talk about upward mobility - and not just jobs and growth - will have the broadest appeal

Video: Sen. John McCain on Qaddafi's last stand: "This will send a message to Bashir Assad, and to Yemen and to other dictators, that their time is nearing the end" 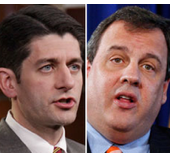 "After a week of intense campaign activity that was supposed to clarify the Republican presidential field, the clamor for new entrants has intensified, with fresh hints from Sarah Palin that she could jump in and pressure mounting on New Jersey Gov. Chris Christie and Wisconsin Rep. Paul Ryan to join the race. The activity suggests the extent to which dissatisfaction with the current field lingers—as well as the possibility that President Barack Obama's growing problems could entice others to seek the chance to unseat him." - WSJ

> Yesterday on Video: Gov. Mitch Daniels on the 2012 field: These are good people with a lot of character...I'd campaign for any one who emerges from our process

Ross Douthat: "Rick Perry’s opponents can’t beat him by turning the race into a referendum on his state"

"Gov. Rick Perry of Texas hasn’t lost an election in 10 tries. Among his vanquished opponents, this streak has inspired not only the usual mix of resentment and respect, but a touch of supernatural awe. “Running against Perry,” one of them told Texas Monthly, “is like running against God.” Perry’s 2012 rivals can’t afford to entertain such thoughts. If either Mitt Romney or Barack Obama hopes to snap the Texas governor’s winning streak, the election will need to become a referendum on Perry himself, in all his heat-packing, secession-contemplating glory. If it becomes a referendum on his home state instead, Perry’s 11th campaign will probably turn out like all the others." - New York Times

"After taking to Twitter last week to declare his belief in evolution and global warming, former Utah Gov. Jon Huntsman Jr. on Sunday again sought to cast himself as a moderate in a field of more extreme Republican presidential candidates." - LA Times

> Yesterday on Video: "Right now this country is crying out for sensible middle ground. This is a center-right country and I am a center-right candidate": Jon Huntsman takes on his Republican rivals

Also from the 2012 presidential field:

> Yesterday on The Republican: American politics according to YouTube

"The election to fill the vacancy left by Anthony D. Weiner’s resignation was supposed to be a mere formality for Democrats. It hasn’t turned out that way." - New York Times 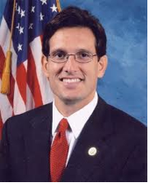 "Our country is facing two related but separate crises. The first is the federal government’s debt crisis, the result of decades of fiscal mismanagement by both political parties as well as unsustainable entitlement commitments. The second is the jobs crisis, which has resulted in painful levels of unemployment and underemployment. President Obama is wrong to think that the answer is to increase spending or raise taxes when so many millions of Americans are out of work." - Washington Post

"Just days after Marco Rubio’s election as Florida’s newest Republican U.S. senator, former First Lady Nancy Reagan wrote to him, asking him to speak at her husband’s presidential library. “You’ve been identified as someone to watch on the national political scene. I’m looking forward to watching you in your new role,” she said, in an invitation that no admirer of her late husband, former President Ronald Reagan, could decline. “Americans are curious to get to know you. I believe the Reagan Library would be a great venue for you to deliver an address.” Rubio will officially be someone to watch on Tuesday, when he travels to California for his first major speech outside of Florida or the U.S. Senate — as well as some fundraising for his just-launched political action committee. He’s expected to expound on a familiar theme of his own and Reagan’s at the former president’s library: the role of government in America." - Miami Herald

Rebels: Libya under our control

"An amateur league of ill-trained rebel fighters appeared to be on the brink of toppling Moammar Gadhafi's 42-year rule Monday after capturing at least two of the leader's sons and infiltrating the Libyan capital. The rebels' Transitional National Council is ready to move to Tripoli, said Ali Suleiman Aujali, the Libyan rebel government's ambassador to the United States. "Libya is under the control of the TNC," he said, adding that Gadhafi brigades have raised the white flag in the key town of al-Brega. CNN could not independently confirm his claim. But the fight might not be over, as celebrations in Tripoli's Green Square -- renamed Martyrs' Square by the rebels -- dampened after rebels told CNN that they'd heard Gadhafi army forces were heading their way." - CNN

Editorial: "The Obama administration’s plan to relax rules calling for all students to achieve proficiency on standardized tests is too lax. No Child Left Behind needs some tweaking, for sure, but the administration’s initial plan goes too far." - Boston Globe