7:00pm The Republican: Democratic bewilderment over Obama's press conference yields this advice: Cancel your vacation, you're in trouble 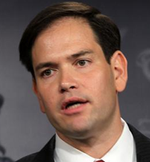 4:15pm The Republican: Get ready for Rubio to rumble! Marco previews a Senate speech in which he'll take aim at Obama, a "failed President" who behaves more like a "left-wing strongman" with none of the "magic" so many promised

3:15pm Good new video on why you should care about economic freedom if you care about having a good quality of life

2:30 Opinion: The disquieting truth about our educational systems is that fraud keeps them motoring along

1:00pm The Republican: Today's CBS poll on economic pessimism: It's not just the economy that's got people down, it's the ongoing housing crisis that's taking a toll on 30-somethings

10:15am The Republican: ObamaCare fact of the day: If you work 40 hours a week, you'll pay more for your insurance than if you choose not to work

"One GOP source on Capitol Hill told The Daily Caller there’s been a push among the conservative wing of the Republican caucus for McConnell to tie the balanced budget amendment to a vote on the debt ceiling." 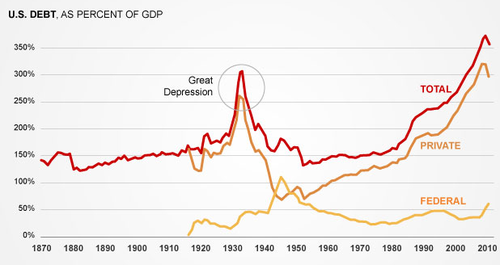 Will Cain, drawing attention to the graph above, urges us not to forget PRIVATE debt - CNN

Obama calls for leadership but where is his own?

Gloria Borger for CNN wishes Obama would give more leadership on debt: "Imagine my surprise when the president came to his own press conference -- which he called -- without anything much new to say on possible ways get to a deal to raise the national debt ceiling. Plenty of talk about gamesmanship, about deadlines and about how even Sasha and Malia are mature enough to do their schoolwork before it's due."

"The reality is that Mr. Obama has provided very nearly the opposite of leadership. He has not only refused to tackle entitlement reform during his presidency; he has attacked those who do, employing dishonest arguments that are at this stage are almost impossible to keep track of." - Pete Wehner

Obama seeks to paint Republicans as friends of the rich 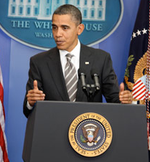 "One of President Barack Obama’s 2012 themes will likely revolve around what his aides call “the contrast” — a portrayal of Obama as a responsible, moderate adult harassed by infantile Republicans who favor the wealthy." - Politico

"Obama yesterday doubled down on his demand for high taxes on "millionaires and billionaires" as part of a budget deal, daring Republicans to choose either protecting the super rich or allowing a devastating US debt crisis." - New York Post

"Supporters of former Massachusetts Gov. Mitt Romney said they have raised between $25 million and $35 million in support of his presidential ambitions, a total that far outstrips his rivals and could further establish Mr. Romney as the Republican Party's front-runner." - WSJ

"Republicans also must not confuse the tea party movement with the larger, more important tea party sentiment. As important as tea party groups are, and for all the energy and passion they bring, for every person who showed up at a tea party rally there were dozens more who didn't but who share the deep concerns about Mr. Obama's profligate spending, record deficits and monstrous health-care bill. The GOP candidate must stay focused on this broader tea party sentiment, not just the organized groups" - Karl Rove in the WSJ

Why Obama is slow to recognize gay marriage

"Even as gay marriage has gotten significantly more popular in the intervening years, it remains a risky proposition with black and Latino voters, and Obama needs them in 2012." - Chris Cillizza for the Washington Post

Aid is to be extended to workers hurt by globalisation – clearing a key hurdle to trade agreements with South Korea, Columbia and Panama - FT ($)

Question to Glenn Beck: What do you think of Republicans?

Answer: “I hate them. I think they are as much of a problem as the other side”.