8:00pm The Republican: Luigi Zingales: Paul Ryan would be the best 2012 GOP candidate because he can defend free markets without defending big business

5:15pm The Republican: Trendwatch: Shouldn't we be worried that life expectancy is dropping, unwed fatherhood is rising, and that people are using "Greece" to describe the U.S. fiscal situation?

3:30pm The Republican: Maybe it's time to spit up the federal government between Austin and Indianapolis, where real fiscal sanity and pro-growth policies prevail

1:45pm Video: "Economic growth is not a government program": Republicans take aim at the Obama record on the economy in today's press conference

1:00pm The Republican: Ryan supports an optional version of the GOP Medicare plan

The Republican: Could Romney-Bachmann be the 2012 ticket?

"House Republicans wary of the Obama administration's Aug. 2 deadline for raising the debt ceiling think they have support for their skepticism from a surprising source — former Federal Reserve Chairman Alan Greenspan... Rep. Steve Scalise (R-La.), who met with Greenspan but declined to comment on their discussion, said that while the exact date of the debt ceiling is in doubt, the problem is not. "They've already moved the deadline, so that shows that there's some flexibility," Scalise said. "But we know it's coming."" - Roll Call

Romney opens up big lead in race for GOP nomination

"Of those who said they were likely to vote in the Republican primaries next year, 30% said they back Mr. Romney, up from 21% last month, when former Arkansas Gov. Mike Huckabee and businessman Donald Trump were still possible contenders. Former Alaska Gov. Sarah Palin, who has yet to say whether she is running, now comes in a distant second, with 14% support. Other leading hopefuls, such as former Gov. Tim Pawlenty and Rep. Michele Bachmann, both of Minnesota, are in single digits." - WSJ

BUT: "Mitt Romney is getting chided today for acting "high-falutin' and haughty" by one of New Hampshire's biggest newspapers after his performance in the state's first GOP presidential debate." - USA Today

And in another low blow... Romney's support among the GOP won't be helped by praise from Al Gore for his position on climate change - Politico

Huntsman strategist Jon Weaver: “There’s a simple reason our party is nowhere near being a national governing party …. No one wants to be around a bunch of cranks.” - Esquire 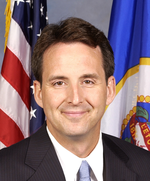 "Right now there is a fierce underground battle being waged over high dollar campaign donors. If you can’t raise money now, before the voters care, you will not have the resources you need to communicate with them when they do tune in. Organizing multiple states, waging straw polls, flying around raising money and running loads of TV and radio is all very expensive. Without constant fuel, a campaign locomotive grinds to a halt. For lesser known candidates like Tim Pawlenty this can create a cruel feedback loop; you need money to buy your way up in the polls, yet without good poll numbers it is very hard to raise money. Early debates are important because if you get good media reviews, you can aggressively peddle those to old and new donors to raise money." - Swampland

"What makes a Perry candidacy intriguing is that he has built out the Texas story into a political philosophy, or movement, erected around the Tenth Amendment. In economic terms, Mr. Perry argues that the nation will grow more if we have 50 states competing with each other rather than competing to survive Washington." - Daniel Henninger in the WSJ

Nate Silver at the New York Times examines how Governors perform better in presidential races than senators: "Not only are governors more likely to win nomination, they also do better than senators even after accounting for their polling. That is, if you take a governor who is polling at 10 percent and a senator who is polling at 10 percent in a race, and the candidates seem about equal in most other respects, the governor is more likely to outperform his polling and win the nomination. Governors likewise hold an advantage over members of the House of Representatives and over holders of most other elected offices — everyone except presidents and vice presidents."

Will any Republican candidate say something nice about government? - E J Dionne in the Washington Post "FreedomWorks PAC plans to launch a “Retire Orrin Hatch” campaign at the Utah Republican Convention this Saturday, the group’s first major move of the 2012 congressional cycle, The Daily Caller has learned... Among grievances FreedomWorks has with Hatch is they say is a legislative history of voting to increase the debt ceiling 16 times, voting in support of Troubled Asset Relief Program (TARP) legislation and voting against a ban on earmarks."

Obama and Congress near deal on three trade agreements and support for workers displaced by global trade...

"Free trade agreements with South Korea, Colombia and Panama have become a centerpiece of the Obama administration’s efforts to boost U.S. sales overseas, a foray into trade politics by a president who, as a candidate, expressed skepticism about the benefits of prior free trade pacts. The Korea deal is expected to generate more than $10 billion in additional annual sales for U.S. companies. But the controversy over the U.S. deficit has stalled the deals, with Republicans opposing renewal of the billion-dollar-a-year Trade Adjustment Assistance program. The Obama administration has said it would not submit the trade pacts unless the assistance program is reauthorized to help workers hurt by outsourcing or increased imports." - Washington Post

"A day after House Speaker John Boehner declared Obama would soon be in violation of the 1973 War Powers Resolution, a bipartisan coalition of 10 members of Congress sued the president and Defense Secretary Robert Gates, arguing they are violating the law." - Politico

"The report says that 184 out of 556, or about one third of 2008 Obama campaign "bundlers" -- donors who agree to raise hundreds of thousands of dollars for a campaign - "or their spouses joined the administration in some role. But the percentages are much higher for the big-dollar bundlers. Nearly 80 percent of those who collected more than $500,000 for Obama took ‘key administration posts,' as defined by the White House." - Fox

Nancy Pelosi saw her net worth rise 62% last year, cementing her status as one of the wealthiest members of Congress - The Hill

The right-wing, blue-state, affable governor who gets everything he wants: Rick Snyder of Michigan 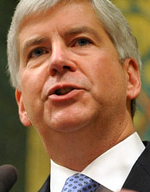 "This wasn’t Snyder’s first deviation from the finger-in-the-eye style of governing that is now ascendant in the Republican Party. Since being elected last fall, he has refused to gut Medicaid, instructed his administration to implement the health care law despite his opposition to it, defended embryonic stem-cell research against conservative attacks, and conspicuously avoided the scorched-earth rhetoric on unions that is popular with most of his Republican colleagues. By all appearances, Snyder comes across as a moderate answer to Walker, Kasich, Scott, and New Jersey’s Chris Christie. But actually, that couldn’t be further from the truth. In his own mildmannered, nonconfrontational way, Snyder is doing a far better job than his more bombastic conservative peers of delivering on the contemporary GOP agenda." - Alec MacGillis for TNR

The danger of assisted suicide laws

"Once you start to set up a system of bureaucratic safeguards, as proponents of assisted suicide (for admirable reasons) usually prefer to do, you find yourself placing the life-or-death decision as much in the hands of doctors and psychologists as in the hands of the would-be suicide himself." - Ross Douthat in the New York Times