6:00pm The Republican: For the first time in a decade as many Republicans as Democrats say the US "should mind its own business" when it comes to global affairs 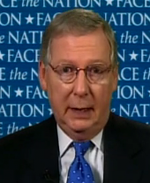 4:30pm Video: Sen. Mitch McConnell on overregulation and tax reform: "We need to quit doing what we've been doing"

12:45pm Video: "If we fail against Gadhafi that's the end of NATO": Senator Lindsey Graham says Congress should "shut up" on Libya

11:30am The Republican: 9 in 10 Tea Party voters intend to vote Republican regardless of who wins the nomination

10:45am Rep. Ron Paul: Why I'm suing President Obama for engaging in military action in Libya

10:15am Video: Rick Santorum: I'm very anxious to talk about national security and foreign policy, it's a real strength for me

Ryan Streeter on The Republican: Where have all the hawks gone? It’s time for one of the 2012 GOP presidential hopefuls to show some foreign policy leadership

Golf win for Obama and Boehner, but no political deals 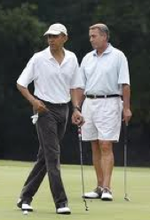 "President Obama and House Speaker John A. Boehner played five hours of golf together on Saturday, emerging with no deals on any of their current conflicts but showing signs that, amid those talks, relations between them are cordial. In a bipartisan pairing, Obama and Boehner teamed up and beat Vice President Joe Biden and Ohio Republican Gov. John Kasich in a game that went down to the wire on the 18th hole, according to White House officials, who provided no further details about the level of play. Neither side reported an alignment in positions about raising the nation's debt ceiling, an unsettled issue that could force the government to default on its obligations by early August. Republicans are pushing for more spending cuts before they vote to raise the debt limit." - LA Times

Putting Presidents: Politics and golf through the years - TIME's Swampland

> Yesterday on Video: Putting and policy: Obama, Boehner, Biden and Kasich tee off

Anger grows among lawmakers over Obama's legal defense on Libya

"On Capitol Hill, legislators who disagree with President Obama’s legal defense of the military operation in Libya will have two options when they resume their session this week. They could try to cut off funding for the campaign, or they could formally register their disapproval that Obama did it without congressional say-so. The first tactic has rarely worked in U.S. history. Unhappiness in Congress was magnified Saturday by a report that Obama ignored some of his legal counselors when he decided last week that the Libya campaign should not be counted as 'hostilities.'" - Washington Post

"There is a growing concern in the Senate that tunnels dug by Mexican drug cartels to traffic illicit goods into the country could be used to smuggle terrorists or weapons of mass destruction...Sens. Diane Feinstein (D-Calif.) and Chuck Grassley (R-Iowa), the chair and vice-chair of the Senate Caucus on International Narcotics Control, are stepping up congressional efforts to combat the growing use of tunnels along the southwest border. Eleven tunnels - used to smuggle drugs, money, weapons, and in some cases people -  have been discovered so far this year, bringing the total number of tunnels found by law enforcement authorities since 2001 up to 125. The majority of the tunnels have been found in southern California and Arizona." - The Hill

"Mexican crime groups have virtually taken over the pipeline system of Mexico's state oil monopoly, stealing growing amounts of fuel and gaining an important source of new revenue as they fight other gangs and Mexico's government, The Wall Street Journal reported Saturday, citing Petroleos Mexicanos. The problem is not new, but it is expanding at a rapid pace, as the crime groups learn technical expertise that can foil electronic monitoring systems." - Fox News

"Despite the Texas governor’s recent statements that he holds little interest in serving in Washington, Perry strategist Dave Carney said he is closer than ever to jumping in. He said Perry does want to run, but has to determine whether there is time at this late date to put together a competitive organization." - Washington Post

"Five Republican presidential candidates have signed a pledge to advance the anti-abortion movement if elected to the White House, but the current front runner for the 2012 GOP nomination — Mitt Romney — isn’t one of them. Michele Bachmann, Newt Gingrich, Ron Paul, Tim Pawlenty and Rick Santorum each signed the pledge, sponsored by Susan B. Anthony List, vowing to nominate judges and appoint executive branch officials who are opposed to abortion. The pledge also commit signers to push legislation to end all taxpayer funding of abortion and to sign a law to 'protect unborn children who are capable of feeling pain from abortion.'" - Politico | Fox News

"Newt’s mad as hell and he’s not going to take it anymore. After enduring a week of unflattering news reports blaming him and his wife for the mass staff exodus from his presidential campaign, Gingrich is fighting back. He’s gone on the attack, largely against the unnamed staffers and consultants who jumped ship and fueled press accounts of a campaign in disarray and a candidate whose wife was calling the shots. Gingrich began his push-back tour Wednesday with slaps at his former operatives, dismissing them for their narrowness of mind." - Politico 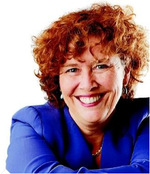 "America is a free country and radio talk show host Herman Cain is free to run for president. Even with low name recognition, the former Godfather's Pizza CEO polls well. Veteran pollster Scott Rasmussen ranks him third, with 10 percent of the GOP primary vote, behind former Massachusetts Gov. Mitt Romney and Minnesota Rep. Michele Bachmann. His supporters seem enthusiastic. But they should understand one thing: Cain cannot win, because when it comes to politics, he is an amateur." - SF Chronicle

News from the states:

"U.S. officials say Pakistan has apparently tipped off militants at two more bomb-building factories in its tribal areas, giving the terror suspects time to flee, after U.S. intelligence shared the locations with the Pakistani government. Those officials believe Pakistan's insistence on seeking local tribal elders' permission before raiding the areas may have most directly contributed to the militants' flight, though they also suspect low-level security officials may have tipped the militants off." - USA Today

NASA launches "100 year quest" to send humans to the stars

"NASA center and the Pentagon's lead research group are striking financial flint to steel in hopes of sparking a sustained effort to make interstellar space travel a reality. On Thursday, an official with the Defense Advanced Research Projects Agency (DARPA) announced that the agency will award a $500,000 grant to the person or group who can lay out the most effective road map for financing and implementing a research and development program to lead to interstellar travel by early next century." - Christian Science Monitor

"Many of the more than 2,200 liberal activists and bloggers gathered for Netroots Nation are frustrated. They will vote for President Barack Obama over any Republican on Nov. 6, 2012. But, they say, they don’t have to be happy about it." - Roll Call ($)

...while "Obama, who is known to be tech savvy, plans to periodically tweet his own campaign messages, which are usually sent by social media staffers. OFA will be managing the president's Facebook and Twitter accounts, but any tweets coming directly from the President will be signed '-BO.'" - Fox News

Michael Barone: "Government looks to past, free enterprise to future" 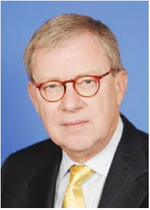 "Trying to put everyone back in the position they once thought they were in simply won't work. But it does sound attractive politically. People can remember what life was like in the past. We don't, however, know what it will be like in the future. Republicans want less government spending and more leeway for entrepreneurs to create new businesses and jobs. No one knows what innovative products and services will emerge. That's the beauty of free enterprise, but it also makes it a hard sell politically. Unless voters have figured out no amount of government spending is going to restore the old status quo." - Washington Examiner