5:00pm Video: "If they haven't noticed we're broke": Representative Jeff Flake responds to state bankruptcy proposals, commenting that although waivers should be granted in certain instances, it is not Washington's responsibility to bail them out

4:15pm The Republican: What They're Saying: Unimpressed, freshman lawmakers share their thoughts on the SOTU

12:45pm The Republican: The CBO's "wake-up call" had to wait until the day after the SOTU?

10:00am Video: In an interview discussing the impact of union pensions on state deficits, Charles Krauthammer says that "the only way out is going to be a form of bankruptcy which will release [states] from obligation"

Ryan Streeter on The Republican: STATE OF THE UNION SHOWDOWN - WHEN IT COMES TO AMERICA'S GREATEST CHALLENGE, OBAMA AND RYAN STARE EACH OTHER DOWN...BUT RYAN'S TALK COMES OUT ON TOP

Platform: Part 4 of Dr. David Gratzer's series on the future of the GOP battle with Obamacare: the "12 cent problem"

Video: Tim Pawlenty, in pre-SOTU interview, calls on Obama to apologize for mistakes

Full transcripts and audio of Obama, Ryan and Bachmann - NPR

Key themes of Obama's State of the Union address

What did Obama mean by "Sputnik moment"?

"The Soviet launch of a basketball-size object called Sputnik in October 1957 served as a wake up call for a relatively fat and happy United States. The U.S. was then between wars in Asia, building stylish gas-guzzling cars for a swelling middle class, gambling in Havana, and generally feeling pretty good about the future. The surprise of Sputnik - the world's first Earth-orbiting satellite made by man - reminded Americans there was a big, brash alternative out there and it was a lot smarter than anyone had thought... Obama is hoping to prod the country toward greatness here on Earth, in the fields of clean energy technology, high-speed trains, and scientific innovation, among other things, to increase the country's economic competitiveness. Rising economies in Asia provide the threat and possibility this time around, and Obama, much like Eisenhower half a century ago, wants the country to wake up." - Washington Post

The SOTU responses from Paul Ryan and Michele Bachmann

"Some Republicans worried that two rebuttals to the president’s State of the Union address Tuesday night might weaken the party’s message on the heels of his big speech. But GOP leaders can breathe easy because the messages from Minnesota Rep. Michele Bachmann and Wisconsin Rep. Paul Ryan were largely the same: President Barack Obama has driven up the deficit while failing to stem unemployment – and his new health-care law is bad." - Washington Wire

John Poheretz at Commentary gives Ryan top marks for his response and suggests he is president material: "Maybe it would be wiser for a 41-year-old like Ryan to wait until 2016. But this speech reminds us that the deep bench of younger politicians — with Ryan and Marco Rubio and Chris Christie and Bobby Jindal and Nikki Haley, among many others — really belongs to the GOP." (Also see Jennifer Rubin's booster of Ryan).

Erick Erickson at Red State was more impressed with Bachmann: "Paul Ryan’s speech was okay. His blood shot eyes and Eddie Munster, Jr. haircut could have used some work. But he was good. Michelle Bachmann, however, shined in an easy to understand speech with a common man touch."

President Barack Obama works on his State of the Union Speech with Director of Speechwriting Jon Favreau in the Oval Office, Jan. 24, 2011. (Official White House Photo by Pete Souza). 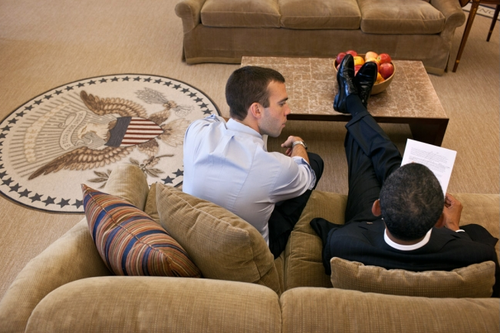 The New York Times has a graphic of Congress' Kumbayah moment.

Senator Ben Nelson wants to end partisan seating forever: "Sit not by party but by state or by alphabet or in some other way" - Roll Call

"The Republican-controlled House, hours before the State of the Union address, passed a resolution Tuesday calling for more drastic and immediate cuts in domestic spending than envisioned by President Barack Obama in the speech." - WSJ

"Arguing that the United States can no longer blindly turn over billions of dollars to the United Nations, members of the House Foreign Affairs Committee said the new Congress should withhold contributions to the global body until it adopts serious reforms." - Washington Times

Other politics in brief: